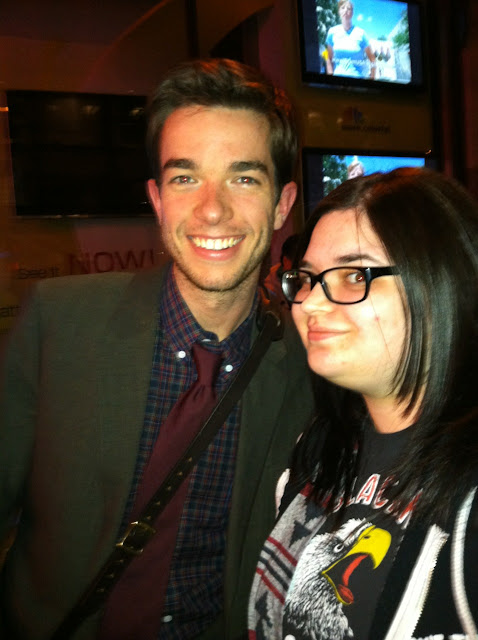 Please excuse the fact that this photo is a little blurry. My friend Patti took it and she was freaking because we both love John and couldn't believe he came back to take pictures with us. The story of this picture can be found here.

John Mulaney is one of my all time favorite comedians, whether he's writing sketches for SNL or doing his own stand up. All of you should know that I love him considering I have done multiple write ups about how great he is. I saw him back in October at UCB doing his new hour that he hasn't filmed yet and it was SPECTACULAR. I cannot wait for it to premiere (I have no idea when that'll be). John also has a sitcom picked up by NBC produced by Lorne Michaels and I cannot WAIT to see that.

John Mulaney isn't only funny but he's just so unique. Some comedians have routines that seem insanely relatable, almost like those situations have actually happened to me and I know the punchlines. I find those jokes rather stale and not as funny as a situation where you go "OH MY GOD WHAT!?" His stories aren't too outrageous, but the situations he puts himself in can be, but I find those the most entertaining. I love people that are different but seem like they are totally nice and sweet and kind of relatable and I think of John Mulaney that way. He was surprised when two girls wanted their pictures with him and actually knew his name when everyone else at 30 Rock that night wanted to meet One Direction and he was super nice to come back with a bright smile. Plus he's so handsome.

Sometimes I'm afraid that when I finally try stand up out I'll be a little too out there for the audience but then I remember that there are people out there like John Mulaney who make so many different people laugh in so many ways and I think "Maybe one day that'll be me" One can only hope.
celebrities comedy favorite comedian wednesday john mulaney my silly face