One of my best friends works at Walt Disney World. She and another one of my best friends have gone there on vacation a couple of times together and with their families. These two best friends of mine were friends before I became such good friends with the Disney friend which is why they would go away together and I would just get sent pictures. Now you should know that I am the kind of person that gets very jealous very easily. It doesn't matter if you're my friend or a celebrity or even just someone I saw online, if you have something that I want I will be insanely jealous of you and think about it pretty often. It's honestly just really sad.

So of course I wanted to go to Disney World with my friends! Why wouldn't I? I had only been once as a moody 13 year old. In case you were wondering a 13 year old who just feels weird constantly and has insanely low self esteem doesn't really have fun in Disney World. The exact opposite really. I was very awkward and quiet and didn't really want to do anything or even be there. Once I got a bit older and out of that super awkward horrible phase I wanted to go back and actually have fun but it never happened. I just saw several of my friends go during and after high school having the time of their lives and I basically hated them all for it because I'm a jealous monster.

So after high school my best friend gets another best friend and this new best friend loves Disney and ends up working there. And I meet this new best friend and all three of us start hanging out whenever we're all around. And we have fun and we all become best friends. Those two friends go to Disney together and I watch and of course and as predicted get jealous. One day my OG best friend and I joke we should go to WDW together and we look up how much things cost. Spoiler alert, they cost a lot. Our Disney bff tells us that if we book something with her we'd get a discount. We jokingly do the math and holy shit we can afford to go! So we make some plans and book a trip. I hadn't gone on a big trip with airplane travel since I was 13 and this was crazy. It was a joke because we never thought we'd go. But we actually went, and I fell in love.

When I was younger I had only been to Hollywood Studios, which was MGM at the time, and Magic Kingdom. I don't remember much from that trip, partly because as an idiotic teen I didn't care. As a 24 year old adult I cared SO. MUCH. I went to Epcot and ate around the world! I saw Illuminations: Reflections of Earth on the water! I rode the monorail! I walked through Cinderella's Castle! I MET CINDERELLA! 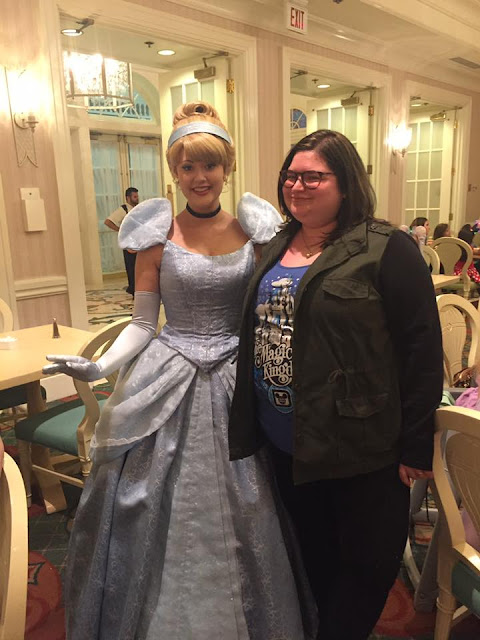 I had the best time of my life. In fact we had such a great time we ended up going back the next year and in 3 days I'll be back in my favorite place eating Mickey shaped food, dancing along to a parade, spinning in a tea cup, eating churros, and wearing my Disney themed baseball caps (also on my first trip I discovered I love how baseball caps look on me after being told several times in the past by multiple people that I look "dumb" in hats). We have been planning this trip for almost a year and it's insane that it's finally happening this week.

Now I know a lot of people probably don't care about this or WDW in general but I've found out through my old pal the internet that so many adults love Disney. People design clothing and special Minnie ears (I own two pairs of handmade ears, thank you Etsy) and accesories for your magic band and pins. Other people cosplay in the parks with some really cool fun character looks. Some people just go there and review the food to tell you if it's good or bad or cheap or vegan. It's amazing how many people love this place. I don't blame them. I love this place so much I'll be packing later tonight for sure.

So yeah, I'll be 27 in January and we're already talking about planning a trip in the spring next year because we want to see Epcot's Flower and Garden festival. We usually go during the Food and Wine festival because eating and getting tipsy/on the verge of being drunk are both things we all enjoy. I don't care that I'll be heading for the airport around 4 am on Thursday morning, just as long as I'm eating a churro later that night and looking at a giant dragon made out of Legos it's all good.
cinderella disney world tigger travel walt disney world wdw