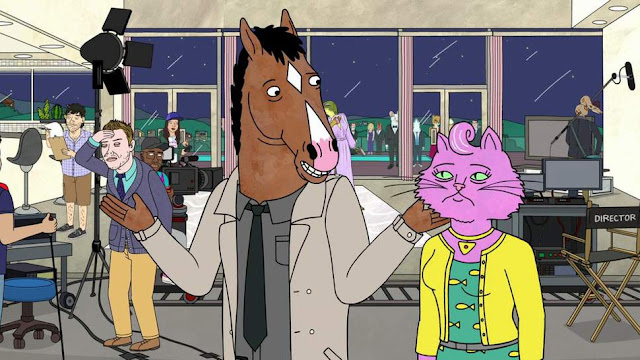 On September 14th Netflix premiered a brand new season of their hit animated series BoJack Horseman. About a year ago I started watching this show for the first time. I was in a deep deep depressive episode of my own and nothing made me feel, and I do mean that. I wasn't feeling anything besides emotionally numb. I barely ate, barely slept, and just existed quietly in the background of other people's lives. I would go on my phone a lot and read whatever I saw on my Tumblr dashboard. A lot of posts were about this show called BoJack Horseman, starring Will Arnett as the title character. The show looked very funny from the quotes and screencaps I would see getting reblogged so I decided to give it a chance.

At that point the show had just premiered it's fourth season so I had a lot to catch up on. The show grabbed me from the first episode and I was hooked faster than I had ever been before. All I would do for a solid week was watch this show. Still barely eating or sleeping, I would lie on my bed on my phone watching this show until my hand cramped up. Then I would move to my couch and lie there watching it on an actual TV. This show started out incredibly fun. Fun sight gags and tons of animal puns along with so many Hollywoo (yes, I meant to leave the D off) inside jokes made this series insanely funny.

As it went on, the writers dug more and more into who BoJack was as a person. He's a washed up celebrity with substance abuse issues, a poor upbringing due to the fact that both of his parents didn't care about him, and he can't form an actual relationship without things being super complicated on his side or both sides depending on who he's with. I saw too many things in him that I see in myself and I hated it. An episode that really hit me hard was season four episode 6 "Stupid Piece of Shit". BoJack's inner thoughts are telling him how worthless he is and how he's basically just a shitty person and a "piece of shit". At that point I was almost done with the entire series so far and super into my own episode. I was full of self loathing and hatred. I was a stupid piece of shit and a shitty person and I felt absolutely worthless. As soon as we heard Bojack's thoughts I started to cry. Crying then turned into sobbing and I saw something I didn't want to see but needed to.

This series has showed me that my feelings are valid. I am allowed to feel how I feel, even if I feel like a waste of space which happens more often than I'd care to admit. Other people also feel that way, and that this isn't just all in my head like I had previously thought. After I finished season four I watched several episodes over again and noticed so many more things I identified with, including stories involving other characters like Diane (a writer turned BoJack's friend), Princess Carolyn (BoJack's agent/ex-girlfriend), and sometimes even Todd (BoJack's friend who sort of lives on his couch). Diane is confident and smart but doesn't always feel that way, Princess Carolyn is cunning and dedicated but lets her personal life suffer so she can deal with her work, and Todd is a smart and caring person but also a homeless mostly jobless man with no drive and few aspirations.

Season four was great. It really dove into the characters and really showed who they actually are. Season five took this to a whole new level. We see so much more of their personal lives, upbringing, backgrounds, and just what's happening with them beyond the surface. Seasons one-three did a great job setting up these characters in these situations and showing us their lives but four and five have really shown us who they truly are and what they're capable of. We've seen both their personal growth and their lack thereof. We've seen that these characters aren't perfect, even in a cartoon world. They have struggles and imperfections and slip ups pretty frequently. I think that's why so many people heavily identify with this show. It's more relatable than most of the live action shows on TV today.

Even though these new episodes are heavy they are still funny. They still use lots of sight gags and animal puns and different kinds of formats. A particularly funny episode from season five was episode 7 "INT. SUB" where a married couple who happen to know and work with our main characters tell each other about their days and change names and characteristics to keep the characters we know confidential. This particular episode is full of funny moments and great visuals that make it worth watching over and over for the sight gags alone. "INT. SUB" follows one of the most emotional episodes to date, "Free Churro". The entire plot revolves around BoJack talking to what we as viewers assume is a room full of people at a funeral home and giving his recently deceased mother's eulogy. In this episode BoJack really lets loose on how he's feeling and his confusion about whether he actually has feelings or not. We see him let his guard down and try to make sense of his terrible relationship with his mother, especially near the end of her life.

I'm glad to have seen this show grow into what it's becoming. So many shows can lack character growth and growth in general but this show is always changing, becoming so much more than a goofy cartoon that you watch for a quick laugh. It's smart and growing right along with it's characters. Shows like How I Met Your Mother have thrown character growth right out the window (fuck that finale, we did NOT deserve that), but BoJack truly seems like it will continue to grow and change and thrive with time and the influence of the world today. I'm going through another emotional rough patch so season five's timing was perfect for me. I binged several episodes and cried along with it. I started being more honest and letting people know how awful and shitty I feel and it's made me feel lighter in so many ways. This show is very much worth watching whether you love comedy, animation, fun storytelling, or drama. It offers so much to so many and it truly deserves all the praise it's gotten over the years.
animated animation bojack bojack horseman cartoons comedy depression netflix personal television tv will arnett