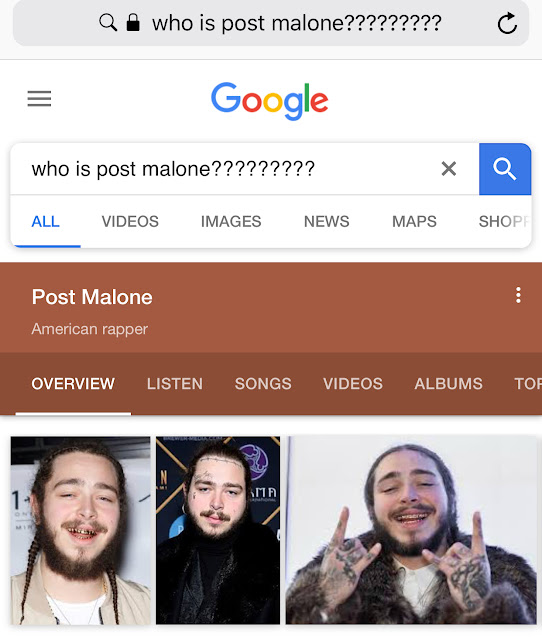 After listening to his music I never expected him to look like...well...what he looks like. The first time I ever heard one of his songs was at a concert (not his concert). They had been playing music videos on big screens before each act went up and they played one of his songs. I liked it but totally forgot the title of it and then struggled to find it after the concert. Oh well, right? WRONG.

I enjoy watching top 10 countdown videos on Youtube (specifically WatchMojo, and no, they didn't pay me to name drop them. I just love them a lot). I probably watch them a few times a week and can watch 20-30 in a sitting (yes I know I have a problem, and no, I don't need any help. I'm fine, Susan!). A couple days after the concert I started watching a video about the best songs of 2018 so far. I liked a lot of the songs and downloaded a bunch. One of these songs just so happened to be by Post Malone. It was a different song than the one they played at the concert, called "Better Now". I weirdly fell in love with the song right then and there. The lyrics were relatable and I liked the music a lot and enjoyed his voice. Thankfully the video also mentioned his other song I heard AT THE CONCERT called "Psycho" so I got that one, too. 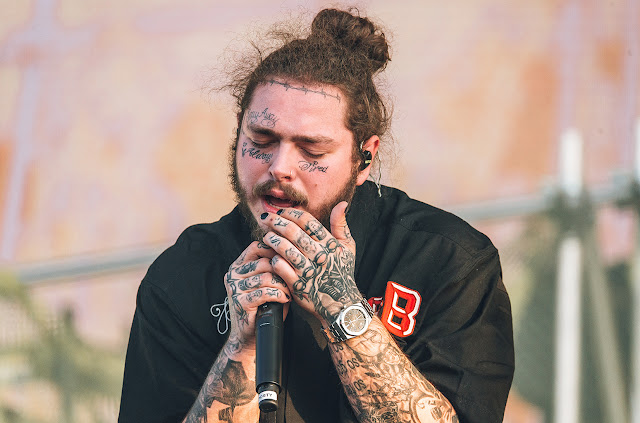 Here's the thing. Besides LOVING that one song and knowing/liking the other, I don't know anything about Post Malone. Not his age or where he's from or how long he's been around. Nothing. And I haven't even really looked into it, despite that Google search I did. I saw his photo and said "good enough". I know he's nominated for a couple MTV Video Music Awards this year because I see him in the ads for it, but I don't even know what songs or videos he's up for and I forget the categories he's in. I know he sings because I've heard it, but I have no idea what category his music would even end up in.

Now because of ALL of this, I wouldn't say I'm a real fan of his. Don't get me wrong, I like the two songs I've heard and think his voice is nice, but I truly don't know anything about him. Real fans would probably say "listen to more of his music!" and maybe I will. I do remember back when his album came out. The cover art sticks in my mind, but I never even read who the album was by when tons of people I followed on Instagram posted about it. I didn't care. Maybe I should have. Maybe I made a poor judgement call by not caring and could be a huge fan now had I given it a chance. Well anyway, I will be watching the VMAs and am excited to see if maybe he'll win and give some sort of speech because then I'll have heard him talking about something for once. I voted for the VMAs once and didn't vote for him because at the time I didn't know his songs. I doubt I'd even make a difference but if you lose because of me, sorry Post Malone.
celine dion countdown videos google mtv mtv vmas music post malone shania twain songs vmas watchmojo youtube