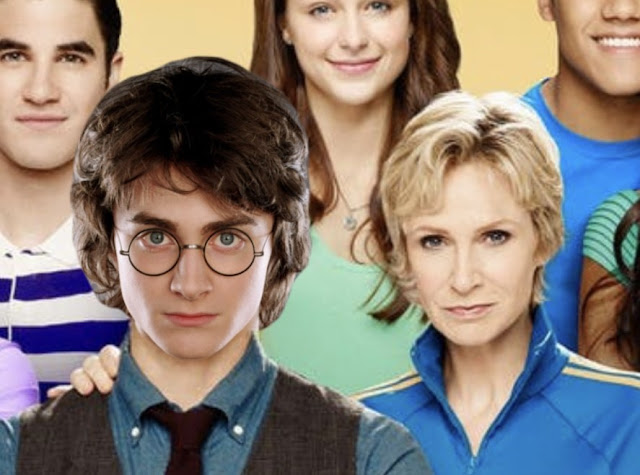 "Harry, I can't believe you're being transferred to a school somewhere in America", said Hermione sadly. "We're gonna miss you so much around here, mate", Ron added while also sounding sad. "You guys can come visit me sometime and I'll always come back for Christmas", said Harry. "Always?" "Always"

Harry packed up his supplies and Hedwig and got ready to head to America. It was exciting to see a new country even though just a few years earlier it was exciting to see the wizarding world. Harry was always up for a new adventure whether it's traveling to a new destination or running to Honeydukes with Ron for some treats. "Ready to go?", said Hagrid with tears in his eyes. "Oh Hagrid, I'll only be gone until break and then I'll be back for the holiday" "I'm just going to miss you so much Harry" "I'm going to miss you, too"

"We've finally made it! Albuquerque, New Mexico (that's where High School Musical takes place, no idea about Glee but it's fine)!" Harry is so eager to go to school he drops his things off with his host family and heads over to Rydell High (Grease) right away. "Hello, Mr. Potter", says an unfamiliar voice. Harry turns around to see a woman standing near a locker. "I'm Jane Lynch and you don't mess with whatever I'm up to at this school, ok? Because I can guarantee you whatever I have going on is more important than anything you ever had or ever will have going on, capace?" Before he can answer Jane Lynch just runs away. "I already feel right at home", says Harry to himself.

Harry is walking down the halls when suddenly he hears angelic voices coming from a far off room. He follows the tones, close to tears at how beautiful they sound. He makes slowly makes his way down the hall towards a door in a dimly lit area. Glee Club is written on a sign stuck to the door with some tape and Harry knows that this is everything he's ever dreamed of. He stares in through the window at all the children singing "It's the eye of the tiger, it's the thrill of the fight!" "Simply gorgeous", says Harry with tears in his eyes. Suddenly, a man inside sees Harry staring and walks over to the door. "Come on in" Harry is excited. He slowly walks in as the kids change their song to "Don't Stop Believin'". "This is the most amazing thing I've ever heard" he tells the mysterious man. "This is Glee Club"

Chapter 4: Glee is a Feeling

"Hi, I'm Blaine", says a man who mysteriously looks like a short haired contact lenses wearing Harry. "It's like looking into a mirror", they say to each other at the exact same time. "Let me introduce you to the gang. That's Amber Riley" Amber is beautiful and has just a confidence about her that Harry can't deny being attracted to. "This is Lea Michele" Lea is also beautiful and has a voice to match. "This is wheelchair kid" Wheelchair kid smiles (I don't know much about him so moving on). "And this is Chris Colfer" "You have the voice of an angel", says Harry who has just fallen in love with the boy standing in front of him. "I'm Mr. Schuester" says Matthew Morrison (note: I only know his character's name because my band teacher in 7th and 8th grade was named Mr. Schuester. Weird right?). "So that's some of the gang. There are other characters around like cheerleaders and whatnot but this is us. So wanna join Glee?" "Of course!", yells Harry excitedly. "Keep the noise down", says Jane Lynch randomly appearing and then disappearing just as quickly.