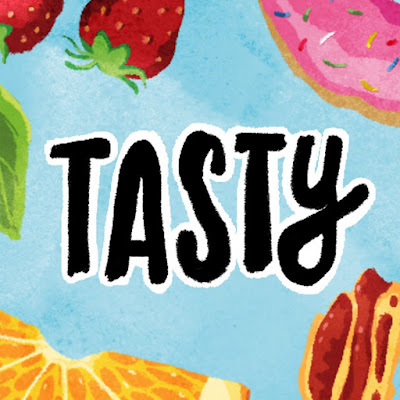 Right as I was starting to write this piece my brother, boyfriend (I'd say fiance but the computer I'm using right now is confusing and I can't get that little accent over the e and it's really bugging me), and cat all walked in to ask me what I was doing. Well, my cat didn't. He and I had a fight earlier and then he came in to sit on my lap while I wrote this. I hugged him a little to much and he decided to bail. His loss. ANYWAY Tasty!

You guys all have to know Tasty, right? If you're on Facebook or love Buzzfeed (who doesn't?) you have to know what Tasty is. In case you have no idea what I'm talking about, Tasty is Buzzfeed's cooking channel? Blog? What really is it? I know it's food videos and recipes about how to make delicious looking treats and that plenty of people comment how the recipe "won't work" or "makes no sense", and as someone who hides in the shadows just enjoying looking at the food, you people are THE WORST. Buzzfeed also has a channel(?) called "Nifty" about DIYing things (which I also love) and people make the same comments. I made a tweet a while back about Nifty that said: 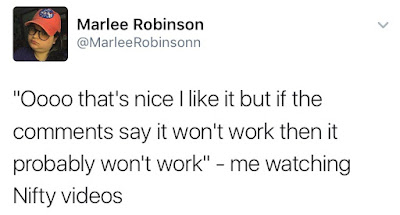 That's sort of true. Some of the comments do turn you off from the product they're beautifully shoving in your face. But, come on, it's beautiful! "7 Easy Chicken Dinners" is a simple article. It's literally just 7 delicious looking chicken dinners that range on easy to medium cooking levels. I love cooking chicken, even though I have fucked it up multiple times. Cooking is hard when all you do is watch a video and say "Yes, I can do this. I am Gordon Fucking Ramsey. Hear me scream!" and then you go into the kitchen and almost drop a huge knife on your foot that you quickly catch with you hand. #winningsalmonella, right guys?

They have so many different categories. Chicken, meat, easy chicken, easy meat, DRINKS, healthy food, DESSERTS, and DESSERTS again because damn. I've been wanting to make their one apple bake recipe for months now. I haven't done anything about it, BUT I STILL WANT TO. I basically want to make everything I see. It sucks because I don't always have the time or the money for the ingredients and also I'm incredibly lazy. I can't tell you how much time I spend lying in bed watching videos and going "I should make that!" and then scrolling to the next video and saying the same thing. Food is amazing and I love trying new things but cooking isn't always easy.

Being addicted to cooking videos has it's rewards, too though. I've made a few things I've seen online and most of the time they come out great. I'm always looking for fun food and drinks for future parties and Tasty is a great source for fun food. I don't think I've seen anything on it that I wasn't impressed by. Recently I saw a sponsored video for a snack pack featuring some fancy (to me) crackers that I wanted to try. They want you to make a spread for it with a food processor but since I don't have one of those I was thinking of changing it to store bought hummus. One great thing about their recipes is that you can try whatever you'd like and just use them as a base. It's really great.

If you're addicted to Tasty let me know so we can watch the amazing dessert videos together in awe. And if you don't know Tasty and love to cook or want to learn a few things or just love looking at food and imagine eating it check them out!
buzzfeed cooking desserts dinners food tasty twitter