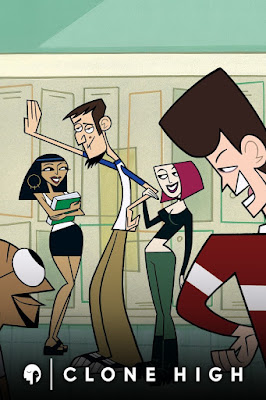 I am late to the game with this one. I'll be honest, I messed up. I should've been watching Clone High when it was running, but when it premiered in 2003 I was only 11 and too young to get the jokes. Earlier this year VH1 Classic turned into MTV Classic and started showing classic MTV shows and music videos. One of the many shows they brought back was Clone High. It. Is. AMAZING. It is so funny and quotable and incredibly relate able. I mean, who hasn't felt like a lesser version of the person you were cloned from just trying to make it in this crazy world? I know I have.

If you don't know, Clone High is a Canadian show created by the people behind The Lego Movie, Scrubs, and The Last Man on Earth. The theme song explains the entire show, but I'll sum it up for you. The government dug up famous and political people from the past as a secret experiment and used their DNA to make clones. The clones grew up together in a secret town with foster parents and are now in high school learning about life and all that junk.

It's hard to choose just one favorite character because everyone is incredibly funny. The cast is pretty flawless to me. Will Forte as Abe Lincoln and the narrator is a great choice. Will is very talented and uses different tones to his advantage to be able to portray so many different emotions as Abe. Abe is all over the place. Does he love Cleo or Joan? Will he ever be able to live up to his potential as Abraham Lincoln had?

JFK grew on me very quickly. At first I thought he would be a big bully, but after a while you get to know him and he makes a big impression, especially with his Snowflake Day album. Jerky Balls and Jerky Balls II are pretty catchy tunes.

Unfortunately the show was cancelled after only one season because of the representation of Gandhi. He's a party animal who gave up hope of living up to the original Gandhi, and he's crazy amounts of funny. His friendship with Joan is great. AND SPEAKING OF JOAN OF ARC Joan is such a relate able character for me. Being in love with someone who doesn't know and doesn't even seem to get it is hard. I'm sure we've all been there, right? Not just me, right? You guys!? It's so obvious to everyone except Abe. All Abe can think about is Cleopatra. Poor Joan.

Anyway, if you love high school shows this show definitely is one of those. It's hilarious and so so funny. If you want to watch it check out your local listings for MTV Classic or you can get the whole first (and only) season here on Amazon for $19.99. I bought it, even though I had every episode on my DVR (I painfully deleted them all after I opened my set) because I felt like I really just needed to have it. I even paid for overnight shipping because I'm a nutcase!