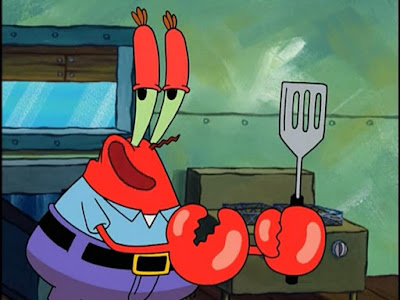 Hello everyone! Today is TV Tuesday but since I'm all by myself with 8 episodes of Spongebob on my DVR I figured I'd try a TV Time. Now I know what you're all thinking, "You always do Spongebob for TV Time. Why not call it Spongebob Time?" Well you're right. I just love this show so much that I always want to talk about it. AND NOW I THINK I WILL.

In "Wet Painters" Mr. Krabs gets Spongebob and Patrick to paint his living room but if they get any permanent paint on anything but the walls they're in a lot of trouble

So the episode is over. I know that because Blake Shelton just told me about him hosting the Kids Choice Awards. Whenever I see a good episode of Spongebob at 10 am I record it for later and usually just watch it late at night when I can't sleep. It almost always never helps. Well that's it for this edition of TV Time! Check back next time when I probably re-watch another episode of Spongebob