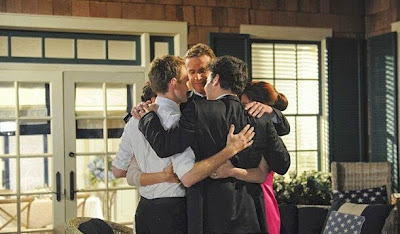 I realize that I haven't done a TV Time in a long time, and I'm sorry about that. I knew that I couldn't let HIMYM's finale slip through the cracks, though. This show meant a whole lot to me and I'm going to tell you why. HIMYM is the story of 5 friends living in NYC facing challenges in their love lives, their relationships, their jobs, and each other. I found this show to be unique, even though a lot of people find it to be a Friends remake. I found the characters to all be unique and funny with all their little quirks or dislikes and mannerisms. Ted Mosby is nothing like Ross Geller. Barney Stinson and Marshall Erikson are no Joey and Chandler and Robin is certainly no Rachel Green. The characters created on this show are all their own. Lily is nothing like Monica Geller or Phoebe Buffay. She is Lily Aldrin, a kindergarten teacher and artist. Ted Mosby is an architect with dreams that are taller than any skyscraper he could design. These characters are their own people and I love that. I love their originality and their friendships with each other. I love how close they are no matter what the situation is. I love how much they really truly love each other.

If you haven't seen the finale or the show and just want to watch it DO NOT READ ON. Everything below is my opinion. I am no TV expert who will grade this episode (honestly I can't think of any grade suitable for it). I am just a fan talking about what I liked, didn't like, and so on and so forth. I also am a Tumblr user so many of my opinions weren't just influenced by the episode but by the many fans of the show online. I am going to talk about each character in bullet form as my "Things That Stood Out" section:

I always thought that if Ted dreamed big enough and fought as hard as he did maybe he'd get the dream ending he wanted. That show gave me hope that the finale kind of took from me. I have never really been like Ted but I kind of want to be now. I want to dream big and try hard and just work for what I want, no matter how big or silly it could be. Ted Mosby was the ultimate dreamer and the ultimate influence on someone who just needs a reason to push forward. No matter what happened with him he tried and tried and he even tried letting go, even if it never really worked. He put more effort into his life and relationships than any real person did and I find that inspiring. Even though he lost Tracy he knew he still wanted love. He loved Tracy so much and seeing their relationship this past season meant a lot to me. Knowing that you can find someone who is your perfect match out their and keep them in your life until you just can't anymore. That gives me hope that I can hold onto love for my whole life if I really want to and try to. Maybe I didn't agree with Ted and Robin the past 9 seasons and I didn't really agree with them in 2030 last night, but Ted Mosby is a dreamer and Robin is the woman of his dreams according to season 1 Ted, and maybe she was, but so was Tracy. Tracy thought she'd only have one big love in life with Max, but she had another with Ted, and maybe Ted got two big loves in life, too.

During this I came to some more realizations I never thought of before and I bet if you got this far you can see that. I will miss How I Met Your Mother so much. Every Monday night they were there for me making me laugh after a rough week or making me cry after tugging at my heart strings. That show will always have a special place in my heart, a special red cowboy boot shaped place.
barney stinson how i met your mother how i met your mother finale last forever lily aldrin marshall erikson robin scherbatsky spoilers ted mosby tracy mcconnell tv TV Time