CRYING AT THE RAINBOW PEACOCK 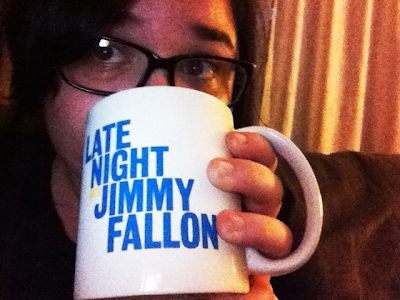 HELLO 2014! How are you!? We haven't talked in while. To celebrate my return I'm going to tell you a story that I'm quite fond of, the time I saw Late Night with Jimmy Fallon (it took some digging to find this picture, which wasn't the one I actually wanted to use but it'll work out just fine).

It was July of 2011. I was at work, where I still work, and I got a text from my friend Doug. He told me that he had just won band bench seats to Late Night and wanted to know if I wanted to go. The musical guest was They Might be Giants and the main guest was Neil Patrick Harris. I screamed at work, if I remember correctly. I rushed home and begged my mom to let me go. Back then I didn't really go into the city. My mom doesn't really like New York and didn't want me there alone. She gave in when I started screaming about the show and I was tearing up. She said yes! My dreams were coming true!

I went to bed that night just really giddy. It wasn't even the day of the show and I was freaking out so much! I woke up in the morning and sprang out of bed and into the shower. I had never been this excited before. My mom dropped me off at the train station and I went into the city to meet up with Doug. I had been to the city maybe 3 times before with other people that I could remember so I was also pretty nervous to go alone, but my excitement took over. I pretty much danced the whole way on the PATH train to World Trade where I was meeting Doug. I found him at Hudson News, hugged him, and then we rushed to the subway. I had only been on the subway twice before, too, and I was EXTREMELY nervous. Doug worked and lived in New York for school so I trusted him. He didn't let me down, not this time (he did on the way to Brooklyn once but that's a different story).

We get off and as we're walking towards the building I can see it very well. I'm just staring up at it in a daze crying. I had always wanted to go to 30 Rock. I loved everything comedy related that went on there. We went inside the NBC Experience Store and I was still crying. Everything was there! T-shrits! Mugs! Lanyards! Figurines! EVERYTHING I HAD EVER WANTED! That day I bought an NBC lanyard and my Late Night mug (pictured above). Everything was just so cool and awesome and I was in love with that store.

Doug and I had to go upstairs to the cafe to get our tickets for Fallon so we headed up the rainbow lit stairs while The History of Rap played on a bunch of TVs in front of us. It was just...the best. Doug and I got our tickets and wristbands and were told to come back at 3 for the taping so we wandered around 30 Rock for a while. We went to Nintendo World, a toy store, the MoMA store, and then ventured back inside 30 Rock to see some of the stores and stuff that were in the building. There was a Ben & Jerry's that was packed with people buying Late Night Snack (which is DELICIOUS if you haven't had it).

3 hit so we went upstairs to the main lobby where we were led upstairs outside of the studio. We were very close to the front of the line which was awesome and we met a lot of people who were really excited for the show. People were wearing Late Night or TMBGs shirts and it was so cool to be around people that were just as excited as I was. Finally it's time to go in and of course the security take incredibly long with my bag and we end up being last instead of first. I was FURIOUS. As it turns out my reason for being angry was very stupid. Band bench seats don't stay seated for the whole show, but we'll find out more on that later.

A warm up guy comes out and starts amping everyone up. They had an audience dance contest I almost volunteered to do and I wish I had because the song they danced to was "Poison" by Bell Biv Devoe and I have MOVES to that song. After the contest ended The Roots came out and played a song and one of them ran out into the crowd. Super cool. Then Higgins came out and everyone cheered and then Jimmy came out and everyone jumped up and screamed. I looked at Doug and thanked him for bringing me.

The show started and everyone was just so excited. Jimmy said it was Chris Kattan week and HE CAME OUT and I was crying and not breathing. They played Water War which, in my opinion, is the sexiest game on Late Night. Jimmy got all wet and had to change and dry off so The Roots played some songs and it was fun. I don't remember what else Jimmy and Higgins did besides sing "Splish Splash I Was Taking a Bath" for an extended amount of time before bringing the guests out. Jimmy also did a short commercial for something that I don't remember. Then NPH came out and talked about a Smurfs movie (not sure if it was 1 or 2 but does that really matter? No) and he was charming and handsome as usual. Then he recorded promos with Jimmy, Higgins, and Chris Kattan for a little. This show was so perfect. Author Fran Lebowitz came out and talked about something. I don't know what it was but she was funny. Once her interview was over it was time.

Band bench seats were asked to get up and come downstairs onto the stage. I never really watched the music guest on Fallon before so I didn't actually know what was happening. We all went downstairs and stood on the stage Jimmy does the monologue on. I was shaking. I looked to my left and there was Jimmy and Chris sitting and talking. We were very close to each other and I, again, was crying. I looked to my right and there were TMBG. I stared so creepily at them for a while it was enough to make Jon Linnell give me a half wave and creeped out smile which was AMAZING. We walked up these tiny steps and were told to sit down on this little what looked like a fire escape above the band, stage right.

TMBG played two songs, one for the show and one as a web exclusive on Late Night's website. They played "Can't Keep Johnny Down" from their then new album Join Us and "Birdhouse in your Soul" for the exclusive. Doug and I danced and sang and I felt amazing. I had never done anything like this before and I was just having the time of my life. After they finished Jimmy thanked everyone for coming and the show was over. Everyone got their stuff and went outside. I went home that day in a daze. I don't remember ever being that happy, even though I was squished like a sardine on the PATH train back. That didn't matter. The whole day was awesome.

I went home that night and set up a recording for the show (pictured above) even though I stayed up and watched it live, disregarding my exhaustion. My mom and I watched it together and laughed. We saw me and Doug and freaked out. I had never been on TV before, even though I was only in the background. It was the coolest thing I had ever done.

Since then I have seen other late night shows live but that one was special. It was my first time at NBC, my first time being around celebrities like that, and my first time non-stop crying in public. I'll never forget how special that day was and will always thank Doug for letting me share it with him.
late night late night with jimmy fallon my silly face nbc neil patrick harris stories they might be giants tv