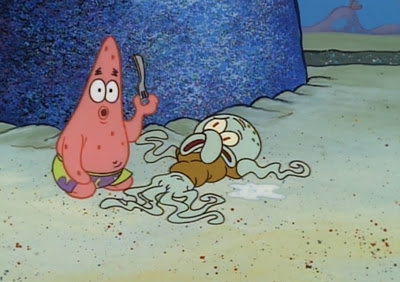 Welcome back to TV Time! I have decided that once I hit episode 5 of Spongebob I'll start to add other shows to my roster. If you have anything in particular that you'd like me to do leave a comment or send me a tweet.

Today I will be doing episode 4 in the series. The first half of the episode is called "Naughty Nautical Neighbors" In this episode Squidward tricks Spongebob and Patrick into not being friends with each other anymore but it backfires for Squidward.


The second half of episode 4 features "Boating School" Personally I love this episode. Spongebob always fails his driving test (something I can relate to) and gets Patrick to help him pass. Patrick is super funny in this one.

Things That Stood Out:
That's it for this episode. And next time I do one I'll start to branch out with other shows. If there's one you'd like me to do please comment or send me a tweet. Thanks for reading!
spongebob squarepants tv TV Time