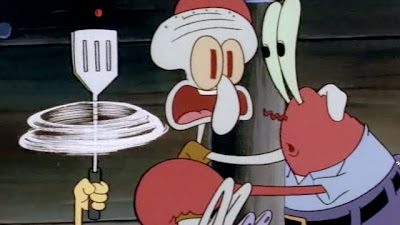 The Help Wanted episode of Spongebob (along with the other two episodes from the pilot) are not available on Netflix. I don't think I've seen any of those three episodes in years so you can imagine how surprised I was to put on Nick 2 today and see Help Wanted just starting. I was super happy and decided to watch it to see what I had missed years ago when I first saw it. There were a lot of things I found very funny that I don't remember that much from before. Squidward and Mr. Krabs have a funny relationship in the episode. They goof around when they tell Spongebob about the fake spatula they want him to buy and they seemed like they were good friends. Another thing I noticed was that there was no one in the Krusty Krab at all besides Squidward and Mr. Krabs. The Krusty Krab is always filled with people but in this first episode no one is around. One of my all time favorite things from the episode was when Squidward is cleaning the front door and someone drew a picture of him on it that says "Loser" The drawing looks exactly like him too and he just looks like he doesn't even care anymore. I also enjoy the contrast when Spongebob is looking for the spatula at Bargain Mart and the Krusty Krab is being taken over by anchovies. Spongebob just walks around the store singing about the spatula to himself ("Bargain Mart. Meeting all your spatula needs") while Mr. Krabs and Squidward are freaking out in the little boat screaming ("I want my mommy, Mr. Squidward!"). It's a very funny episode that I wish was on TV more often. "Reef Blower" and "Tea at the Treedome" weren't on which disappointed me but it was good to see the first episode again. I forgot how funny it really is.
spongebob spongebob squarepants tv TV Time