ROBIN SPARKLES IS A REAL HUMAN BEING IN MY MIND 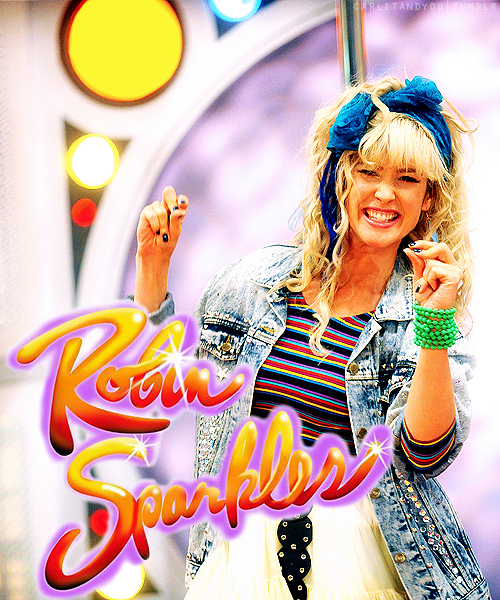 Robin Scherbatsky is a fictional character on the amazing show How I Met Your Mother, portrayed by the lovely Cobie Smulders. Robin is a Canadian badass that loves guns and isn't afraid to be her own person, but when Robin was a teenager she was a teen pop star in Canada named "Robin Sparkles". Robin Sparkles had hit songs like "Let's Go To The Mall" and "Sandcastles In The Sand" and starred on Space Teens, a Canadian educational children's show.

Now I know that Robin Scherbatsky isn't real and therefore Robin Sparkles is also not real but SHE FEELS REAL TO ME! I listen to "Sandcastles In The Sand" on repeat every day for like an hour and just think. That song speaks to me. "Let's Go To The Mall" is my go to dance song. I don't know. She may not be real in real life but Robin Sparkles will always be real in my heart.
cobie smulders how i met your mother robin scherbatsky robin sparkles