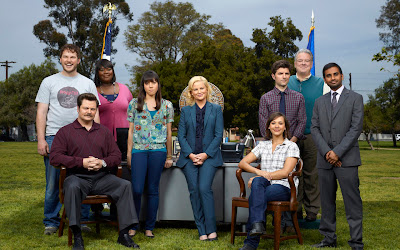 Parks and Recreation is a comedy on NBC's Comedy Thursdays. It stars Amy Poehler as Leslie Knope, "a mid-level bureaucrat with a strong love of her home town of Pawnee, who has not let politics dampen her sense of optimism", according to Wikipedia. Leslie is, in one word, awesome. She is the sweetest and kindest person in the world. Leslie would do anything for her friends and for Pawnee. I want to grow up to be just like her, but not to have her job or anything. I just want to be that nice and caring and wonderful some day.

Here are the rest of the cast members and the characters they play:

I'm not gonna lie when I say I didn't like the first season of this show. It just didn't do it for me. I also didn't really like the character Mark. I prefer the show's current cast and just everything about it. I've cried watching certain episodes, like last week's episode "Halloween Surprise". You can watch the full episode here on NBC's website for free. the first 4 season are all on Netflix instant streaming if you've never seen the show before. It's just a really inspiring workplace comedy. All of the characters stand out in their own ways and their relationships are all very sweet and entertaining.
adam scott amy poehler aubrey plaza aziz ansari chris pratt comedy favorite tv show tuesday jim o'heir nbc nick offerman parks and recreation paul schneider rashida jones retta rob lowe tv