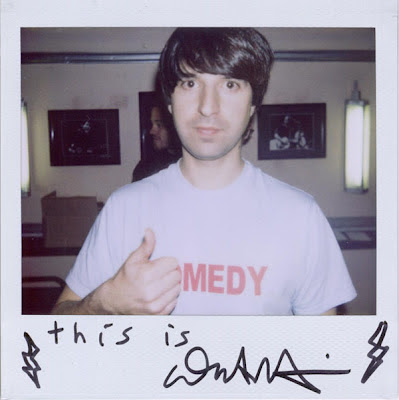 OH MY GOD YOU GUYS THIS IS MY 100TH BLOG POST (according to this site). I'm going to use this post to tell you about a favorite comedian of mine (cue Weakest Link music). This week's comedian is DEMETRI MARTIN!

Demetri Martin is a 39 year old Greek comedian who grew up in New Jersey (where I grew up). Demetri graduated from Yale University and received a full scholarship to NYU School of Law, even though he was accepted into Harvard Law School. But Demetri Martin never became a lawyer or anything like that. Instead he started doing stand-up and made a name for himself with his witty "bits". He does a lot of silly drawings (that you can find here on his website) and plays several instruments including the guitar, harmonica, piano, glockenspiel, toy bells, and a few other things. Sometimes he plays them at the same time. It's pretty hilarious.

I started liking Demetri Martin a few years ago (5 or 6, I'm not sure) when I saw his special Demetri Martin. Person. I thought his jokes were fun and how he went about them (drawings, songs, etc) was really cool. He's also really cute so I enjoy looking at him. He had a short lived show on Comedy Central called Important Things With Demetri Martin that I watched all the time. I even cried when I found out it got cancelled. Luckily Demetri came out with a book entitled This Is a Book. It has a lot of fun drawings and interesting fake stories from different people's and object's points of view. I think in one story a bee starts telling the story of how "shit went down" and it's just great. I pre-ordered it in time to get a signed paper thingy from him and I love it so much. His new special, Demetri Martin Standup Comedian, premieres Saturday September 29th on Comedy Central at 10 PM. It'll be available for purchase on October 2nd. I know I'll be purchasing it!