February 22, 2012
On Friday, February 17th 2012, my friend Nicole and I attended Chris Hardwick's Comedy Central hour special taping at the Skirball Center for the Performing Arts, an NYU theater in Manhattan. We got there at 4 in the afternoon and waited on line for the 7:15 show. We were second in line, which ended up being super long. The line went all the way around the block and ended on the other side of the building. We talked to some of the people on line with us and I ran into my friend Sierra and her friend Sarah, who also had tickets to the show. Chris Hardwick came by before the show started and thanked us for coming. He also looked right at me and said "I like your UCB hoodie!", which made my insides melt. He was talking to me and no one else!

When we got in, we saw how big and awesome the theater was/is. We had general admission seats but they put us in the first row behind the VIP section, chosen for their good looks (which is upsetting). But our row was called "Row A" so that was good. Jonah Ray, Chris Hardwick's friend and co-podcaster on their podcast The Nerdist Podcast, opened for Chris at our show. He did half of his jokes (which I heard some of in November at the Gramercy Theater) and then told the rules and regulations for the night, but in joke form. He was so funny. Before the show I saw him walk by and go into the theater and I freaked out, but no one else saw him.

Comedy Central filmed us doing standing ovations, small laughs, applause, and big laughs multiple times which was fun. After laughing at nothing for a while you start to laugh at the fact that you're laughing at nothing. Chris came out after that and did a little more than an hour (some things will get cut so he needed to tell more jokes). I had heard some of his jokes previously at the same show with Jonah at Gramercy, but a lot of it was new and it was so funny. I have no idea when the special will be on but when it is, watch it. It was so funny and just so much fun. 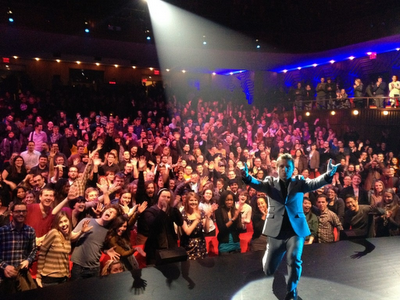 This is a picture of the audience at the end of the 9 o'clock show. I wish they had taken one at the show we were at.
chris hardwick comedy comedy central jonah ray life nerdist podcast reviews