THINGS I BOUGHT THAT I LOVE: COMEDY EDITION

January 30, 2012
Recently I decided that I didn't have enough entertaining videos on my phone. I already had a couple of Lonely Island videos and the SNL Christmas Episode with Jimmy Fallon (if you don't have that, get it because it is so worth the money and time it takes to download).

I went onto the iTunes store and purchased things I've already seen but love watching over and over again. The first things that I bought were episodes of the short lived Comedy Central series Stella. 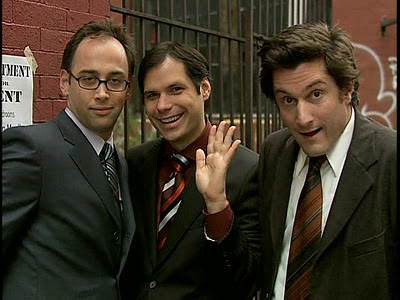 Starring Michael Ian Black, Michael Showalter, and David Wain as three best friends/roommates, Stella was one of the funniest shows on television (that's only an opinion, an opinion shared by a ton of people). Every episode had a new plot and everything that happened in past episodes was irrelevant to the newer episodes. One of my favorite episodes is when the boys go out to a bar on a Friday night to meet girls. Showalter and Black meet women and pursue insane relationships with them. Black becomes a family man, living with and raising his girlfriend's children while Showalter gets abused by his girlfriend. He spends a majority of the episode walking around with sunglasses on, covering a black eye that she gave him. It's hysterical.

I also purchased two episodes of Comedy Central Presents. I got the episode featuring Stella and the one with John Mulaney. Both are excellent. Mulaney's episode is basically The Top Part, but you can see him doing it so it's worth buying. Stella's is their sort of improv sort of not sort of stand up act and it's just amazing. The way Michael and Michael treat David is just endlessly funny. I recommend getting both the Stella episodes and the Comedy Central Presents episodes. There are so many other Comedy Central Presents episodes that have really amazing comedians and if you like comedy (like you should), you should go through the list and find some comedians that seem interesting. There are so many great ones. If you don't feel like purchasing anything, Comedy Central usually shows stand up specials on Fridays, Saturdays, and Sundays. They're all pretty funny.
comedy comedy central david wain jimmy fallon john mulaney michael ian black michael showalter reviews saturday night live stella