SOMETHING I WATCHED THAT I LOVE(D): JOHN MULANEY'S SPECIAL "NEW IN TOWN"

January 30, 2012
As you all know, John Mulaney's new special "New In Town" premiered Saturday night on Comedy Central. My dad, my friend Maggie, my sister, and I watched it and loved it. My dad is really hard to please so I was surprised when he said he thought Mulaney was funny. His style hasn't changed since his first album/Comedy Central Presents episode, and it doesn't need to. He talked about travelling, having a girlfriend, discovering self worth while with his girlfriend, living in New York City, getting bullied as a child, and several other topics that were just great. Anyway, the album and DVD come out tomorrow, Tuesday January 31st. Get them. 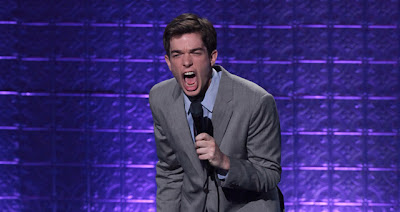