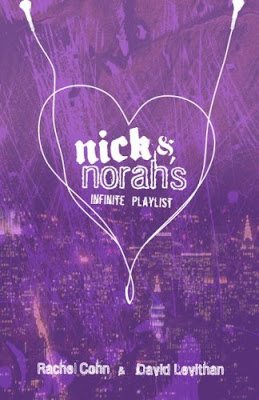 Nick and Norah's Infinite Playlist was written by Rachel Cohn and David Levitham. It is about a guy named Nick that has just broken up with his girlfriend, Tris, that he was very much in love with, even though she didn't love him. Norah knows Tris from Englewood, where they live, and she isn't a huge fan of Tris. She has a best friend named Caroline that likes to party and is "hot". Norah is "not". She's Caroline's keeper. Norah's father also owns a record company so everyone in NYC's music scene knows Norah.

Nick is in one of the bands playing at the club Norah and Caroline are at. Tris is also there, even though Nick told her not to come to any more of his shows. Tris is with another guy "already", as Nick points out. Nick and Norah end up standing next to each other after his show. He's afraid that Tris will see him alone and come talk to him so he asks Norah to be his "girlfriend for 5 minutes". She kisses him, even though that's not something she'd ever do, and the night goes on from there.

Anyway, I'm only half way through the book but I love it. I also love movie they made, starring Michael Cera as Nick and Kat Dennings as Norah. So far, the movie is WAY different but it's still really good. I like the book a lot more so far. When I watched the movie with two of my friends one of them said "Marlee...why are you Nick and Norah in real life...?". I thought about that for a while and I kind of am like both of them. I'd love to have my own Nick, though. That would be amazing. So yeah, read this book! It's funny and sweet so far. Plus Nick and Norah like great music.
books nick and norah's infinite playlist