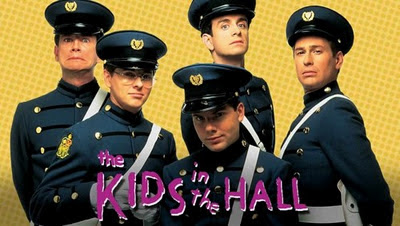 Kids in the Hall is a sketch comedy television show originally broadcast on HBO from 1988-1995 (according to Wikipedia and my DVDs). The Kids in the Hall is a comedy troupe made up of Canadian comedians Dave Foley, Bruce McCulloch, Kevin McDonald, Mark McKinney, and Scott Thompson. The Kids in the Hall were discovered by the great Lorne Michaels (creator of Saturday Night Live). I own every season of their show, their movie Brain Candy, and their most recent project, Death Comes to Town.

I have several friends that love them, some friends that I've turned them onto, and have met several people on the internet who love them as much as I do. My mom originally put them on our Netflix instant queue as a Valentine's Day gift to me. She used to watch it when it was new and she knew I'd love it.

Little did my mom know that me loving them so much would result in me dropping out of community college to pursue a career in comedy. Each member of the Kids in the Hall inspires me and they are on my list of heroes. I will always love them and love what they gave me; new friends, lots of laughs, and the courage to go for what I want in life.
comedy favorite tv show tuesday kids in the hall shows