December 06, 2011
So I was at home all day instead of at work (where I usually do these posts) and I forgot all about Tuesday. It's Favorite TV Show Tuesday and I'm going to tell you all about one of my favorite shows every week. This week's show is Frasier. 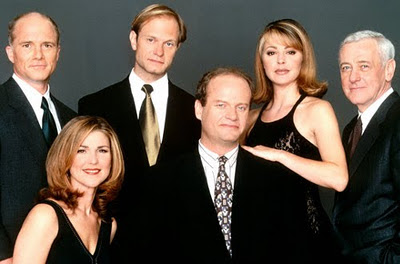 Frasier is a spin-off of the show Cheers and it's centered around Dr. Frasier Krane (Kelsey Grammar), a psychiatrist. He lives with his father Martin Crane (John Mahoney) and his father's physical therapist Daphne Moon (Jane Leeves). Frasier has moved from Boston to Seattle to be closer to his family and go into a new profession; having his own radio show on KACL with his producer Roz Doyle (Peri Gilpin). Frasier also has a younger brother, Niles (David Hyder Pierce), that he always competes with. Niles is also a psychiatrist and is madly in love with Daphne but can't tell her because he's married to someone else.

Frasier was on from 1993 to 2004 and was originally broadcast on NBC (my favorite network). There are 264 episodes. Don't quote me on this, but I'm pretty sure Frasier is the longest running spin-off of all time (excluding The Simpsons. Yes, if you didn't know The Simpsons is a spin-off of The Tracy Ullman Show). I used to watch Frasier when I was a kid and now that they have it on Netflix and constant re-runs I watch it practically every day. I think I've seen every episode.