December 19, 2011
Brain Candy stars Dave Foley, Bruce McCulloch, Kevin McDonald, Mark McKinney, and Scott Thompson as multiple characters. It's about Doctor Chris Cooper (Kevin McDonald) and his discovery of the antidepressant "GLeeMONEX". The drug has a horrible side effect, though. See, the way it works is that when you're depressed and you take it you see your happiest memory and that makes you happy. Because the drug wasn't perfected, it ended up putting people into comas, and they would be stuck in their happiest memories. 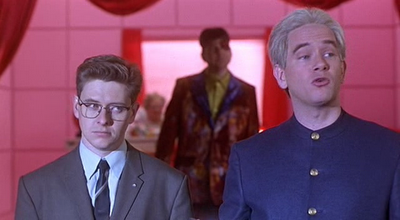 That's a picture of Dave and Mark, playing Don Roritor (Mark) who runs Roritor Pharmaceuticals (the company that made GLeeMONEX), and Marv (Dave), Roritor's assistant. 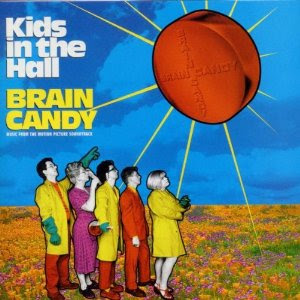 Anyway, the movie is really funny. It's supposed to be somewhat serious but there are so many good characters (a couple from the show) and it's just really good. Watch it.
brain candy comedy kids in the hall movie monday