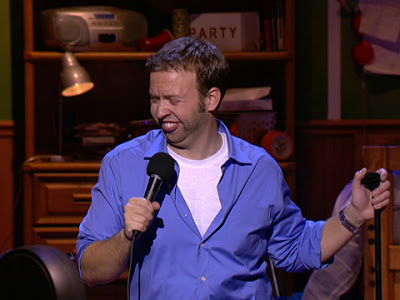 This week's Favorite Comedian Wednesday has a story involved.

When I was 14, I moved from a city to a small town. Same county, but way different places. I moved in August, right before the new school year in this new town started. I had made some friends during September, none that I really talk to now. A couple of them are still my best friends but a lot of them mean nothing to me. In September, I started watching Comedy Central. I had never really watched it before, because I was usually busy talking to my friends on the phone but because of school and not really knowing anyone, I didn't socialize that much.

One night, my dad and I were sitting in our hardly furnished living room watching stand-up specials on a Friday night. That's when I found comedy and knew how important it was to me. When I had no one in my life, I still got to laugh. An hour long special was coming on and I had no idea who the comedian was but I would watch anything just to smile. It was Kyle Cease and the special was called "Weirder, Blacker, Dimpler". It was hysterical. My dad and I just sat on folding chairs laughing the entire time and I just knew that comedy was amazing and perfect. It would always be there and I would always want it around.

I listened to Kyle Cease's album "One Dimple" almost every day while walking to and from school. People looked at me funny while I just walked down the streets laughing to myself. I always find myself quoting him, even when I'm not trying to and I just love all of his work. He is one of my favorite comedians and he always will be.
comedy favorite comedian wednesday kyle cease