December 02, 2011
Fridays will now be known as "Favorite Band Friday". This week's band is They Might Be Giants. 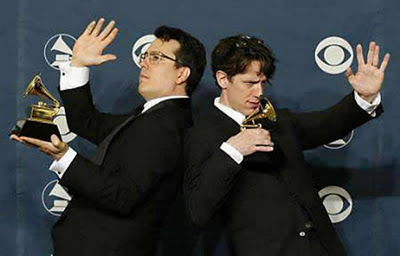 Do you see those awards? Those are Grammys. GRAMMYS. They Might Be Giants have been around since the early 80's and their music is still amazing. I first heard them on Kablam singing "Doctor Worm" and "Why Does The Sun Shine?" and then later singing "Particle Man" on Tiny Toons. Yeah, they're THAT amazing. I was listening to them when I was a small child and I still am. All of my friends like them. They were the first concert I saw with my best friends and it was such a good show. I also got to sit on stage while they performed on Late Night With Jimmy Fallon which was, in one word, epic. In total, I've seen them 3 times. The only other band I've seen 3 times is Fountains of Wayne.

Anyway, They Might Be Giants are completely amazing and even more amazing than that. I love everything about them and if you live in this world and have any interest in pop culture, you've probably heard them in some show or a movie. Look them up and listen to them and love them.


This is my favorite song of their's. It's called "S-E-X-X-Y". The first time I heard it I was at the first of their concerts I've been to and I said to my friend "This song is sexy!" and she said "That's what it's called!".
favorite band friday kablam music they might be giants video