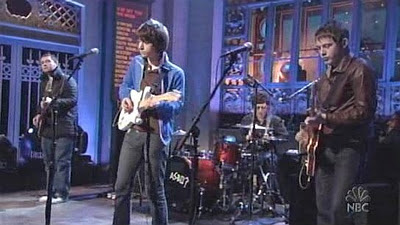 This is a picture of Arctic Monkeys from years ago on what is now one of my favorite television shows, Saturday Night Live. I'll never forget the first time I had ever heard them. I was in 8th grade in the car with my dad after concert band rehearsal (band geek for life...well a lot of it). We were sitting in the, if I remember this right, Shop Rite (?) parking lot and my dad had the Sirius radio on. I loved listening to Alt Nation (now I listen to Sirius XMU), and they were playing this fast song that was just so good. It was called "I Bet You Look Good on the Dancefloor" by Arctic Monkeys. Apparently over the weekend they had been on SNL (I didn't watch it when I was younger), and had been "discovered". The DJ on Alt Nation heard them on SNL for the first time. I thought that song sounded amazing.

Over the years, Arctic Monkeys put out 4 albums. They've become extremely popular and have a huge following. Plus Alex Turner, their lead singer, is totally hot. Like, unbelievably hot. 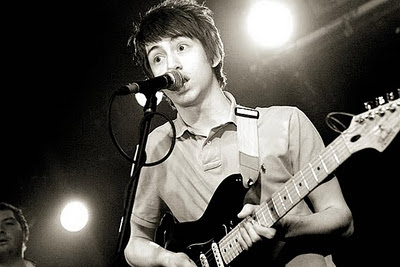 This song is called "Brianstorm". It's from their album "Favourite Worst Nightmare". It's one of my favorite albums, probably of all time, not just of their's. I'm going to see them in March with The Black Keys, and I'll let you know how amazing it was afterwards. So listen to Arctic Monkeys if you aren't already.
arctic monkeys favorite band friday music saturday night live shows videos